Most people have never heard of Istria, and it wasn’t really on my radar either until a few years ago. In 2012, Anthony Bourdain visited this Croatian province and touted it the ultimate foodie destination, so of course, I had to pay it a visit.

During my trip, I had the opportunity to sample some of the region’s most delectable dishes. Istrian food is extremely balanced and diverse. Some dishes spotlight the cuisine’s Mediterranean influence while others play more heavily on the continental side. All of it is exceptional.

Istria is a peninsula that juts out into the Adriatic Sea. Although it is considered to be a part of Croatia, the region lies in three countries: Italy, Croatia, and Slovenia.

The region was originally inhabited by a tribe of people known as the Histri. However, in 177 B.C., the peninsula was conquered by the Romans. Though the Romans have long lost control of the peninsula, Italian influences, especially in the cuisine, are still evident to this day.

Must Try Food in Istria

Crni rizot, sometimes called “fisherman’s risotto,” is black risotto that gets its color from squid ink. Besides squid, the risotto often contains other seafood including cuttlefish, clams, mussels, and other shellfish.

To create this dish, onions are caramelized in olive oil. Then, garlic, assorted seafood, and tomato paste are added. Rice and white wine are also added. After the liquid has been absorbed by the rice, squid ink is added to give the rice its color and flavor. Its unique presentation and rich, delicious taste make crni rizot a must-have if ever you’re in the region.

This dish is an Istrian staple and available at almost all seafood restaurants in the area. 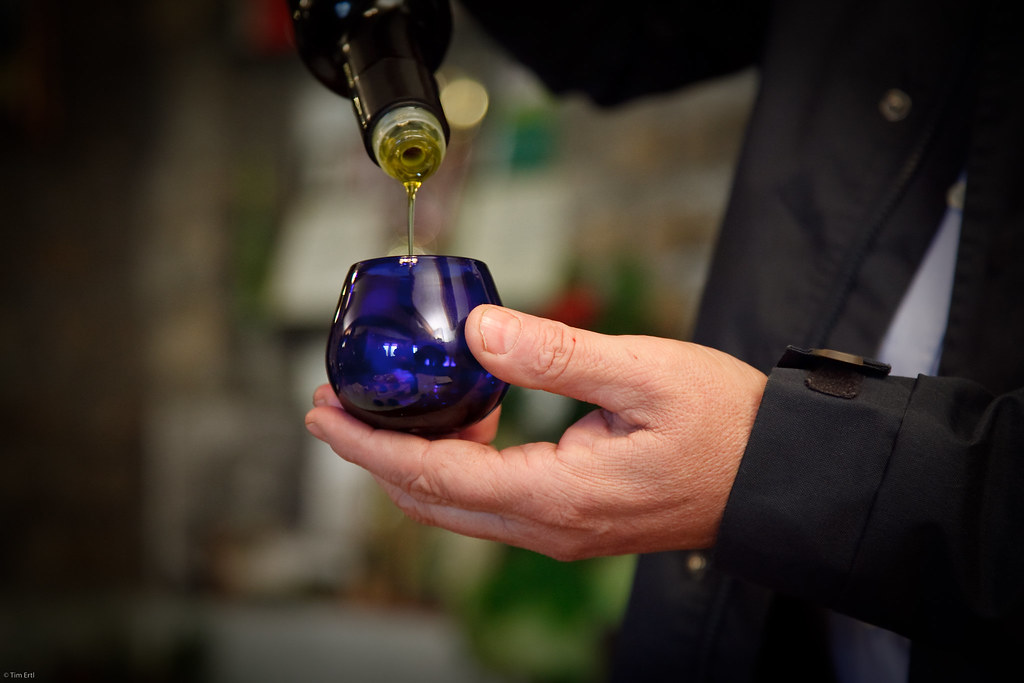 Much like its neighbor to the west, Istria is obsessed with olive oil. They put it on everything. In fact, Istria abounds in ancient olive oil mills, and the ones that are still in decent shape have been reclaimed and are operating as restaurants.

Croatia has been growing olives for centuries but recently gained recognition as a significant producer of high-quality extra virgin olive oil. The region was called the best olive region in 2016, and nine extra virgin olive oils from Istria won gold and silver awards at the New York International Olive Oil Competition.

Truffles are an underground mushroom with a potato-like body that lives in Istrian soil. They are considered a highlight of the region’s cuisine.

In fact, the world’s largest truffle was found in the forest of Motovun, located in the northern central part of Istria. Weighing 2.86 pounds, Giancarlo Zigante – as the truffle was named – was uncovered living underground near an oak tree, a tree with which truffles have a symbiotic relationship.

There are several varieties of truffles, but one of the most popular in Istria is the Tuber Melanosporum. This fine black truffle grows from January until spring and is considered the best among the black variety of truffles.

To celebrate its prized truffles, the Istrian government has established the Tartufo Vero (“Real Truffle”) label which is awarded to select Istrian restaurants for preparing the truffle according to the highest gourmet standards.

Prosciutto is quite popular in Istria – so much so that the region has played host to the International Prosciutto Fair for over a decade. Each year, hordes of visitors flock to the town of Tinjan to sample more than 30 types of the delicacy.

Prosciutto is the Italian word for “ham.” What makes this meat unique is the fact that it is aged and cured during a dry-curing process and only uses the hind legs of pigs. There are two types of prosciutto: prosciutto cotto, which is cooked, and prosciutto crudo, which is uncooked and the most popular to enjoy.

Istria is perhaps the only region in the world in which prosciutto is dry-cured with the skin removed and a layer of pepper added to protect it from going bad. In addition to being served on its own or wrapped around fruits and cheese, other Istrian dishes including bean soup and pasta often call for the meat as part of the recipe.

This naturally occurring plant is one of the best representatives of Istrian cuisine. It is somewhat bitter and has a slightly aromatic flavor. Wild asparagus is harvested during the spring and is used in several dishes throughout the region including pasta and frittatas.

Today, asparagus hunting is a favorite pastime among the Istrian people, and it’s hard to find a family who doesn’t hurry into the forest during harvest season in search of the first dark-green sprouts. Besides being flavorful, asparagus is very nutritious, and folk tradition holds that wild asparagus is a means for purifying the kidneys. Istrian superstition has it that if you eat the raw tip of the first asparagus you pick at the beginning of harvest season, you will be safe from snakes in the forest for the rest of the season.

Istrian’s love asparagus so much that they have a “Days of Asparagus” festival between March 21 and May 14.

If you like pasta (and who doesn’t?!), you will love Istrian pasta. Two types of Istrian pasta are especially popular: fuzi and pljukanci. Fuzi, also spelled Fusi, is a traditional Istrian pasta made from thinly spread dough. The dough is cut into a diamond shape and then rolled around a chopstick (or pencil) to form a quill-shaped hollow tube. It is the most popular homemade and hand-rolled pasta in Istria.

Due to its mild flavor, this pasta is excellent for preparation of various dishes. Its hollow shape allows sauce to cling to the fuzi exceptionally well. Istrians typically serve this handmade pasta with truffle sauce, venison, asparagus, or domestic chicken stew.

Krostule is a traditional pastry that originated in Istria. This crunchy cake is made from flour, eggs, sugar, cream, and brandy. The dough is cut into strips and tied into a loose knot. They are deep fried in oil and sprinkled with powdered sugar before serving. This is a very crispy and delicious dessert and a must-have at all Istrian festivals.

Manestra is the perfect meal to enjoy with loved ones on a cold Istrian evening. It is a thick, traditional Istrian soup whose primary ingredients are beans, potatoes, and cured meat. Many things can be added to the manestra thus changing the name. For example, manestra od bobici is manestra with corn and manestra with jota is soup with sauerkraut.

The soup is a combination of blended beans and pest which cooks slowly for hours on low fire. The pest is made by grounding pancetta, garlic, and parsley together to form a paste. Cured meats may also be added to enhance the taste. Manestra is a super common dish and featured on practically every menu at Istrian restaurants.

While meat from Istria is not as famous as that of Argentina, it is of very high quality and worth tasting when in Istria. Many local restaurants serve homegrown, fresh, cut to order, and delectable cuts of meat.

Steak connoisseurs will not be disappointed with the meat selections in Istria. For a truly authentic Istrian experience, order boskarin steak. Boskarin is Istrian white and grey long-horned cattle and is a symbol of the region.

In centuries past, Boskarin were used as brute force for plowing fields while farmers used its meat and milk as food. However, after modernization, the boskarin population dwindled, and only about 100 remained by the 1990s. Today, there are approximately 2,500 boskarin in the Istrian region, and they are farmed primarily for gourmet purposes.

Also known as the pilgrim scallop, the kapesante is one of the world’s tastiest scallops. Its fresh and unique taste is attributed to the fact that it grows in the Novigrad marine area where salty seawater mixes with fresh river water. It is also a favorite in Istria and is a perfect match for the region’s excellent extra virgin olive oils. Kapesante can be enjoyed baked, raw, au gratin, and many other ways.

Scrambled eggs are prepared almost everywhere around the world, yet no one does them quite like the Istrians. Variations offered depend on the season: wild asparagus during the spring, mushrooms in the fall, and truffles in the winter.

Istria is a peninsula, so it’s only obvious that seafood would be a staple in the Istrian diet. Oily fish, in particular, can be found on many Istrian menus. Sardines, anchovies, Mediterranean sand smelt, tuna, bonito, and mackerels are all equally popular along the coast of Istria.

If you’re up for something sweet, you will love this traditional Istrian dessert. Similar to small donuts, these delectable little balls are usually made on days of fasting, Christmas Eve, and during carnivals and festivals. Often, fritule are sprinkled with brandy and castor sugar before serving.

The climate in Istria is pretty mild, but on the days when it gets chilly, nothing can get you feeling nice and cozy like a steamy bowl of stew. Istrian zgvacet is a traditional stew made with pieces of meat including chicken, beef, and venison in a thick sauce. It is similar to goulash and usually served alongside homemade pasta or polenta. It also goes very well with gnocchi. 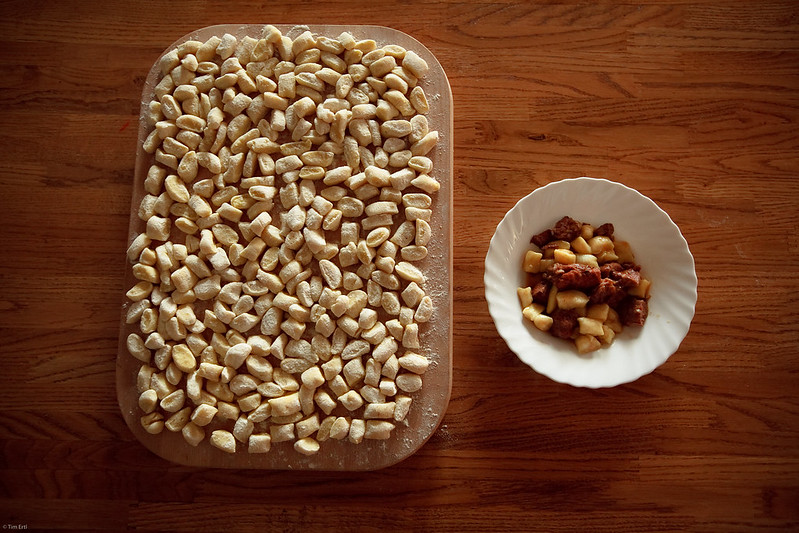 Much like the gnocchi served up in Italian restaurants, Istrian gnocchi is made from boiled potatoes, eggs, oil, and salt. Gnocchi is usually served alongside beef stew, venison, or home-grown chicken stew.

In addition to being a paradise for gourmands, Istria is also known for its incredible wine selections. There are several wine tours you can enjoy which allow you to savor and sample some of the finest varieties the region has to offer.

Sentire is an Istrian destination management company that provides first class services and support in wine tourism. Sentire will handle your wine tastings, accommodations, transportation, dining, sightseeing, and wine tours. All you have to do is come.

Istrians love their food, and their devotion to the delectable is evidenced by the number of gourmet festivals that Istria hosts each year. While there are too many food festivals to list (and way more than you’d like to read over), here are a few of the best that Istrians and foodies look forward to each year.

Truffles are underground mushrooms with a distinct and intense flavor, and Istrian soil allows them to flourish freely. Truffles are a favorite ingredient in Istrian dishes, and their presence in the region’s cuisine attracts many gastronomes from around the world.

Each year, usually in October, Istria hosts Truffle Days. Many local restaurants participate in the festivities, allowing guests to eat fresh truffles and speciality dishes featuring this one of a kind ingredient.

While I don’t know the exact date of Truffle Days 2018, intermittently check out the Istrian Tourist Board’s website for updated schedules.

Food festivals often leave you feeling guilty after hours of indulgence, but that’s not the case with the Days of Asparagus food festival. The wild asparagus is one of the healthiest wild vegetables in Istria, and each year, towns throughout the region host festivals in honor of it. For a month (between March and April), Istrians and tourists from around the world indulge in recipes made with this little green guy.

In Istria, wild asparagus is mostly made with eggs in a dish called “fritaja,” but they are frequently seen served with fuzi (homemade pasta) as well.

Why Poo~Pourri’ is the Best Stocking Stuffer Ever