Korean BBQ is one of the easiest and tastiest cuisines you can pull off at home. The flavors are simple, yet so delicious, and the cuts of meat make such a difference in the way the dish turns out.

In order to successfully take on Korean BBQ cooking at home, you need to be familiar with the different cuts of meat generally used. Different cuts of meats compliment certain dishes perfectly, so knowing your stuff will ensure you make an amazing meal. 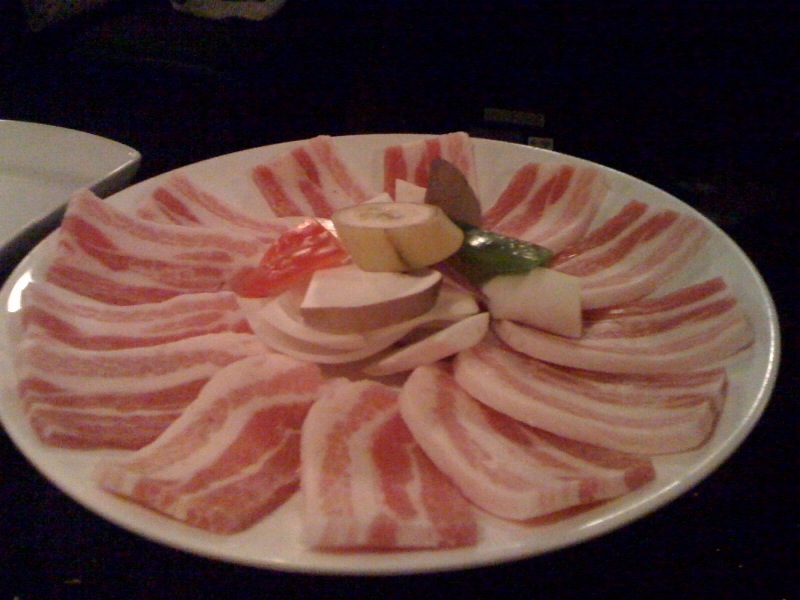 Pork belly is very popular in Korean BBQ. The cut has many layers of fat and is generally cut into ¼ inch thick cubes. This allows to fat layers to char, but the meat to still be succulent and soft. The difference of textures from the crispy fat to juicy meat is what makes it such a popular cut in Korean BBQ.

This cut of meat is mainly served marinated. The marinade is usually made with soy sauce, garlic and sometimes extra fruit for sweetness. The marinate not only flavors the meat, but softens it as well. It is another hugely popular cut in Korean cooking. 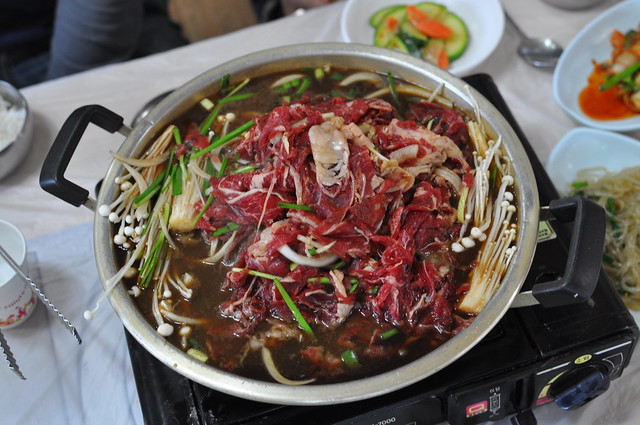 Sirloin beef strips need to be as tender as possible. The sirloin or bulgogi is usually marinated with a mixture of garlic, ginger, onion, sugar, soy sauce and sesame oil. The marinade makes the meat aromatic and flavorful. 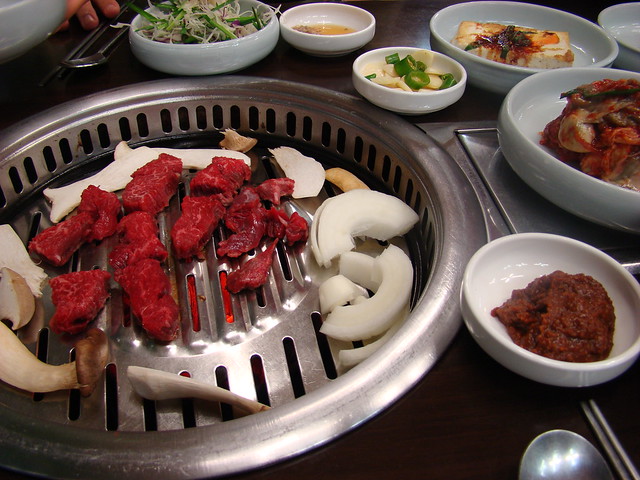 A ribeye steak is a hearty cut of beef. It has flavorful marbling that lets the cut be grilled with enough fattiness to keep it juicy and tasty when cooked.

These strips are served very thin, this makes them easy to cook up. The strips need to be frozen beforehand to avoid the fat melting.

Thinly sliced pork belly is similar to bacon. It is fatty and juicy, and because of its thin slicing it is quick and easy to fry up.

A pork chop is marbled, which gives the cut a great flavour when grilled. The pork chop can either be served whole, or cut into smaller bits and marinated. This cut of meat has a deep flavour, making it popular for grilling.

Skirtmeat has a smaller fat content than pork belly. It is a healthier option to the fattier cuts, but is still full of flavour and cooks up juicy.

The hanjeongsal strips are cut from the front park of the neck and from the pork loin. It is a chewy piece of meat but the even marbling helps make the cut tender and full of flavor.

Pork rib meat is served marinated and braised. It is a very popular cut to serve in Korean BBQ and can either be marinated using a traditional marinade, or using a personal favorite marinade.

Marinated pork can be made using a variety of different cuts of pork. If you have a favorite cut of pork, then use that to be cut up. The marinade is usually sweet and spicy, but you can adjust it to your tastes.

Pork rind is cooked differently in Korean BBQ. It isn’t served super crispy, but is rather cooked until only slightly crispy and still chewy. It is popular among Korean women as it is said to contain lots of collagen which is good for the skin, keeping you looking young.

Thin, marinated pork which is stir-fried or grilled. It is one of the most common dishes served in Korean BBQ and has a sweet and savory flavor due to the Asian-pear and soy marinade.

This is one of the best cuts of meat around, and it is quite pricey. It is beautifully marbled, making it incredibly tender and full of juicy flavor. It is similar to Wagyu beef.

The marbled brisket is sliced very thin because of its high fat content. The thin slicing stops the meat having an overpowering fatty flavor. It is a quick cooking meat, and its an affordable cut as well.

Thinly sliced beef rib meat is one of the most commonly eaten Korean BBQ cuts around. It is affordable, but is marbled well and has a very beefy flavor.

Cha-dol is thinly sliced beef brisket. It is not marinated and grilled as is. It is a fatty cut and grills up quickly, together with a simple dressing it makes a nice addition to a fresh salad.

Thinly sliced beef short rib that is marinated and can be grilled and eaten as is or wrapped in some fresh lettuce.

Beef tongue is sliced up thin and is prepared with a quick grilling. It has a rich and bold flavour and is slightly darker than other beef. The quick cooking time keeps the beef tongue slices juicy and tender.

Beef slices are thin cut off of different parts of beef, grilled up quickly. They can be marinated or not, and served on their own or even as a filling in a roll.

This is a very juicy and very tender cut. Thin slices are cut from the boneless rib finger. After grilling they are usually mixed with a spill of sauce and served up with a Korean perilla leaf and some kimchi.

Beef short rib is cut from the bone of the chuck to the end of the short rib. It is a very popular cut in Korean BBQ and can be found almost anywhere. The short rib is full of flavor and can be enhanced using marinades.

Bul-go-gi is thinly sliced from beef sirloin or tenderloin. It is marinated in a traditional mix and quickly grilled to perfection.

Jul Mul Luck is cut and cubed beef prime rib that is marinated prior to cooking. It is lean but full of rich beef flavor.

Marinated beef short ribs are very popular in Korean BBQ cooking. The short ribs are marinated in a soy sauce mixture that can sometimes be sweet and sticky as well.

Veal guts aren’t overly popular in Korean BBQ, but they can be found here and there. They are grilled and eaten as is or chopped into smaller pieces. It can be a chewy cut.

The large gut can first look like a sausage. It has an elastic outer lining and is naturally stuffed with the intestines natural fat. The gut has a rich flavour, and is quite chewy.

Collar butt is similar to pork belly, it is fatty and absorbs different flavors well. The fat keeps the meat tender and juicy when being grilled.

Boneless chicken thighs are a darker meat than chicken breasts and hold a lot of flavor. There are many different marinades that could be used, and the marinade usually gives the chicken thighs a crispy skin while the meat inside is still tender and juicy.

Black tiger shrimp are such a delicacy when grilled. The shrimp are a great break from the darker meats generally used. The marinade is usually sweet and sour, which works really well with the seafood taste of the shrimp. It is also a great finger food to eat off of the grill.

Marinated squid is one of the easiest and fool-proof dishes to cook on the grill. It is fairly common among Korean BBQ street food stalls. The squid tentacles are marinated for at least 30 minutes to fully absorb the flavor. The marinated squid is usually served over noodles or vegetables.

Spicy squid is made using fresh squid that is cut into bite sized pieces. It is grilled with a spicy marinade and goes really well paired with perilla leaves. The squid can be eaten off the grill or made to use a meal with green and red peppers, carrots, green onions and mushrooms.

Thin slices of pork belly are really great tasting, they are full of fatty layers found in pork belly. The thinly cut slices fry up really quickly and are very similar to bacon slices. The pork belly is usually marinated in a sweet marinade

Pork jowl meat has a rich flavour due to being marbled. It is best braised for an extended period before hand and then grilled, this helps cook through the toughness of the meat. It is also better to cook the pork jowl from fresh. It tastes very similar to bacon with skin and rind making it tasty and crispy.

Rump steak is usually cut up into bite sized chunks and thrown on the grill. It can be served with some salt and pepper or marinated beforehand. It is a very tender cut of meat and will melt in your mouth if grilled properly. It can be cooked rare, medium rare, medium, or well-done. The less it is cooked, the more tender it will be.

Cubed pieces of leg of ham can be thrown on the grill. It has a very smoky flavor and is marbled with fat, making it incredibly juicy and full of flavor.

In order to make some good Korean BBQ food, you will need to know your way around marinades. There are some that are commonly used and are full of flavor, both adding to the dish and helping tenderize the meat as well.

This marinade is commonly used for beef cuts. It consists of soy sauce, sugar, honey, rice cooking wine, seasoning, garlic and green onion. It is a very traditional marinade and gives a sweet and savory taste to the beef.

Kalbi is often used when cooking beef short ribs. It is made using soy sauce, red wine, garlic and sugar. Sesame seeds are also added at times. The red wine brings out the rich flavor of the beef short ribs.

While this is similar to the beef bulgogi marinade, this marinade is made using Korean red pepper bean paste and mirin. It adds some sweetness to the marinade which works well with the pork.

Miso is a popular staple in Korean cooking. The marinade is made using white miso, sake, apple juice, sugar and ginger. It is a fresh, sweet sauce that is amazing on the grill.

Knowing your cuts of meat will help you tackle Korean BBQ cooking much more successfully. You will also be sure of what you are ordering at your local Korean BBQ restaurant.

Some cuts are fattier than others, giving them a very different flavor than the more leaner of cuts. Between pork, chicken, beef and seafood, there are many cuts and options to choose from, but all work perfectly well on the grill. Why Cotz Sunscreen Is the Best Tinted Sunscreen for Your Face

Top 12 Asian Motivational Speakers that Are Changing the World